Congratulations to the New York winners of the grants from the National Endowment for the Humanities (NEH). Grant awards support the preservation of historic collections, humanities exhibitions and documentaries, scholarly research, and educational opportunities for teachers. Listed further below are New York State the recipients of the NEH grants. 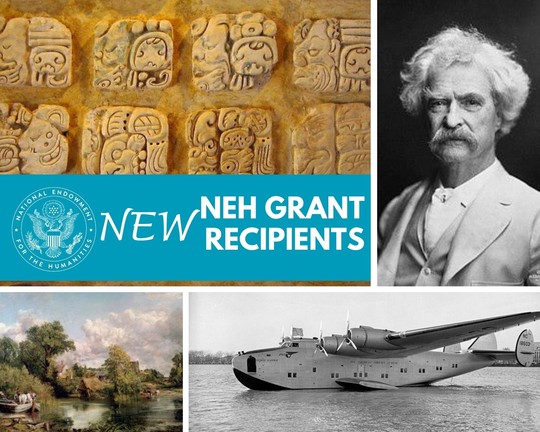 WASHINGTON, D.C. (July 29, 2020) — The National Endowment for the Humanities (NEH) today announced $30 million in grants for 238 humanities projects across the country. These grants will make possible a national traveling exhibition and public programs at 20 libraries commemorating the 20th anniversary of the September 11, 2001, terrorist attack. NEH will also support continued editorial work on the collected papers of presidents George Washington, John Adams and John Quincy Adams, and James Monroe, as well as the papers of Mark Twain, Thomas Edison, and Jane Addams, and the multivolume Freedom, A Documentary History of Emancipation, 1861–1867.

This round of funding, NEH’s last for fiscal year 2020, will support vital research, education, preservation, and public programs in the humanities. These peer-reviewed grants were awarded in addition to $50 million in annual operating support provided to the national network of state and jurisdictional humanities councils.

“These challenging times underscore how important the humanities are to making American culture and world history relatable across generations,” said NEH Chairman Jon Parrish Peede. “NEH is proud to award hundreds of grants to keep our nation’s scholars, students, teachers, and citizens moving forward in pursuit of new knowledge and understanding.”

Forty-six grants for summer seminars, institutes, and workshops will provide professional enrichment and research opportunities for K–12 schoolteachers and college faculty on topics ranging from the cultural legacy of the Federal Writers’ Project and the history of Santa Fe and New Mexico’s pueblos, to the Chinese-American experience in California and the life and writing of Zora Neale Hurston.

Several projects receiving grants respond to NEH’s A More Perfect Union initiative, which supports efforts that promote a deeper understanding of U.S. history and culture and advance civics education in preparation for the nation’s 250th anniversary in 2026. A project at Newberry Library in Chicago will mark the semiquincentennial through a series of community programs examining the influence of the American Revolution in inspiring similar struggles for independence across Latin America. The Noah Webster House & West Hartford Historical Society in Connecticut will use an NEH grant to identify materials within its collection of Revolutionary-era records to digitize for use as classroom resources for the 2026 anniversary. Other grants will support the preservation of artifacts and archival materials at Plimoth Plantation, underwrite new interpretive tours at Old Sturbridge Village to engage visitors, and enable production of five television episodes for PBS’s Poetry in America program.

Significant NEH investment in the preservation of cultural heritage collections at archives, libraries, and museums will help protect the Amistad Research Center’s extensive holdings on the history of African Americans from the 1780s to the present, and preserve a collection of over 600,000 historic objects, records, and artwork at the Autry Museum of the American West. Additional preservation grants will safeguard film footage documenting the events and people of Appalachia at Kentucky’s Appalshop; preserve archives relating to the 1986 Challenger Space Shuttle disaster at the McAuliffe-Shepard Discovery Center in New Hampshire; upgrade storage conditions for heritage materials on the Miami people at the Myaamia Heritage Museum & Archive in Oklahoma; and protect important jazz history recordings, photographs, and memorabilia at Preservation Hall in Louisiana.

Twenty-five new NEH Public Scholar grants, which support popular nonfiction books in the humanities, will enable publication of a new biography of poet Robert Frost; a book on the social, cultural, and political dimensions of World War II as told through the stories of passengers aboard the Pan Am airplane Yankee Clipper, which crashed in Lisbon in 1943; and a history of the women who shaped the Transcendentalist movement.

New NEH awards will support teams of scholars engaged in cutting-edge humanities research. Funded projects include an interdisciplinary investigation of the origins of writing in Mesoamerica informed by recent archaeological discoveries, and the use of computational linguistics to establish if unattributed editorials in the Brooklyn Daily Times were written by Walt Whitman. Researchers will use new NEH grants to create an online historical atlas of the communities connected to the copper mining industry in Michigan’s Upper Peninsula between 1880 and 1950, and to uncover obscured and palimpsestic contents of a medieval book of chants through multispectral imaging.

Other grants will underwrite work on documentary films, including an American Masters documentary on the life and legacy of conservative intellectual William F. Buckley Jr. Grants will also support two short documentaries on North and South Carolina’s Rosenwald Schools, which educated black youth in the Jim Crow era.

Awards for museum exhibitions will support “Crafting America,” a traveling exhibition at Crystal Bridges Museum of American Art on American craft since 1940, a permanent exhibition on Yiddish language and culture at the National Yiddish Book Center, as well as an exhibition at the Detroit Historical Society examining life in the Motor City in the 1920s amidst a booming automobile industry and illicit alcohol trade.

St. Lawrence University - Outright: $9,082
[Preservation Assistance Grants]
Project Director: Catherine Tedford
Project Title: St. Lawrence University Brush Gallery Preservation Needs Assessment Project Description: An assessment of preservation needs and development of recommendations for use of building space at the Brush Art Gallery. Within the wideranging collection of over 7,000 objects, including a large photography collection. These images range from works by American masters to those by amateurs in a series on American G.I.’s and nurses during the Vietnam War.

Society for the Preservation of Long Island Antiquities - Outright: $10,000
[Preservation Assistance Grants]
Project Director: Lauren Brincat
Project Title: Preservation Long Island Emergency Preparedness and Response Program
Project Description: The hiring of a consultant from the Conservation Center for Art and Historic Artifacts to develop an Emergency Preparedness and Response Plan for the five properties that house Preservation Long Island’s humanities collections, as well as the purchase of emergency supplies for each site. The project would protect a collection of 3,000 objects made or used on Long Island from the seventeenth to the twentieth centuries, which range from an eighteenth-century silk gown and shoes to the original 1930s road signs for Robert Moses’s Northern State Parkway. The proposed plan would also safeguard the holdings of the archives: one hundred maps; thousands of twentiethcentury images; tourism guidebooks, planning reports, and real estate brochures; and personal papers from prominent Long Island families.

Ithaka Harbors, Inc. - Outright: $248,518
[Institutes for Advanced Topics in the Digital Humanities]
Project Director: Nathan Kelber
Project Title: The Text Analysis Pedagogy Institute Project Description: A series of workshops, to be hosted at the University of Virginia and the University of Arizona, on approaches for teaching computational text analysis.

Joan & Sanford I. Weill Medical College of Cornell University - Outright: $10,000
[Preservation Assistance Grants]
Project Director: George Makari
Project Title: Rehousing Psychiatry Collections at the Oskar Diethelm Library
Project Description: The purchase of preservation supplies to rehouse 612 feet of archival materials documenting the history of psychiatry. Materials include the papers of influential figures, such as Thomas Salmon and Clifford and Clara Beers, as well as the records of the National Committee for Mental Hygiene (1909–1966). Other collections include items from mental health advocates, Dorothea Dix, Thomas Kirkbride, and Isaac Ray, as well as from Donald Winnicott, the British physician who was internationally recognized for his work in pediatric psychiatry and invented the term “transitional object” (e.g. blanket or teddy bear).

Maria Loh - Outright: $60,000
[Public Scholars]
CUNY Research Foundation, Hunter College
Project Title: Representations of the Early Modern Sky
Project Description: Preparation of a book on the renderings and multiple meanings of the sky in European painting from the fourteenth to sixteenth centuries.

Friends of Alice Austen House, Inc. - Outright: $9,145
[Preservation Assistance Grants]
Project Director: Victoria Munro
Project Title: Improving Storage Capacity for Collections Preservation
Project Description: The purchase of equipment to improve climate control, creation of additional space for storage, preservation training for staff, and implementation of inventory management practices at the Alice Austen House to preserve its collection of objects, letters, photographs, and audio recordings related to the life and work of Alice Austen, part of the first generation of women photographers in America; Gertrude Tate, her partner of 53 years; and their friends and family.

A full list of the 238 grants by geographic location is available here.